If you have any comments about any post in this blog or if you want to get involved in our discussions please visit my new blog:

Thank you
Mohamed Bushry
Posted by clubescape at 11:48 AM 5 comments:

Minicoy Island and the Maldives! 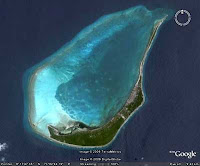 Minicoy Island or Maliku is the only inhabited island of the Maliku Atoll. It is the second largest and the southern-most among the islands of the Lakshadweep archipelago, measuring about 10 km from its northern end to its southernmost point. Minicoy is a long island, almost completely covered with coconut trees.
The locals, the Malikun, call their island "Maliku," as do the Maldivians, while it is called "Minikkoy" in Malayalam. On the southern side of the main island lies the uninhabited islet of Viringili where formerly the lepers of Minicoy were banished.

This atoll is administered by India under the Indian Union Territory of Lakshadweep. The closest island to Minicoy is Thuraakunu in the Republic of Maldives. Since 1956, the Indian Government has forbidden contact between people of the two islands despite their geographic proximity and ethnographic similarities. Minicoy Islanders, like the close islands of the Maldives follow Sunni Islam. The islands were probably Buddhist before like they were in the Maldives.

Today Maliku is administered by India, but claimed by the Maldives. This claim was made in 1983, when the President of Maldives made a public speech claiming Maliku for the Maldives. Even today many Maldivians privately harbour such sentiments. At the same time India is overly cautious of any contact between people of Maliku and its Maldivian neighbours to the south.

An oral tradition of the Maldives (according to the late Magieduruge Ibrahim Didi, a Maldivian learned man) explains why Minicoy is not politically part of the Maldives anymore: Some time in the past (perhaps during the 17th century), Minicoy was devastated by a great cyclone which destroyed most houses and a great number of coconut trees. Following the catastrophe, a delegation of Minicoy islanders from the best families in the island sailed to the King in Male' asking for gold to help them through the hard times. However, the Maldive King told them that he had not enough money in his treasury and that he was not able to help them. Hence the delegation of Maliku nobles went onwards to the Malabar coast, where they found favor with the king of Cannanore (Kannur) who welcomed them and helped the Minicoy people to rebuild their island in exchange for their loyalty. Henceforth the Minicoy Islanders owed allegiance to this kingdom of the SW Indian shore.

Today, Maliku has a combined population of 9,500.
Under the Laccadive, Minicoy and Amindivi Islands (Laws) Regulations, 1967 of the Government of India, Maldivian nationals can only visit Maliku if they are permitted by the High Commissioner of India. The High Commissioner of India in Malé shall intimate the names of the persons whose visits are permitted and the period of their stay to the Administrator of Lakshadweep sufficiently in advance. The Administrator may, on valid grounds, extend the period of stay of Maldivain nationals.
Posted by clubescape at 4:36 PM 53 comments:

Airport Hotels, Safari Yachts should not have alcohol!

The increase in the smuggling and illegal sale of alcoholic beverages in Male has taken a sharp rise in the recent months. In most of the cases, it is expatriates (Sri Lankans, Bangladeshis, etc) who are seen to be taking part in such activities, along with help from locals. I suggest the following actions if we want to see a decline in this:

1. Permits are currently given to foreign teachers, seaplane pilots, etc. to purchase liquor from places such as resorts and the Airport Hotel and consume such products in Male’. There is no way to prevent such foreigners from selling alcohol drinks to locals. I suggest that we stop issuing such permits. Any foreigner who wants to consume alcohol should do so in resorts but he should not be allowed to bring such beverages to any inhabited island.

2. Currently many foreign residents of Male visit the Airport Hotel to consume alcohol. This has apparently become an easy access point to bring alcohol to Male illegally. Similarly the Ocean Reef Hotel in Addu Atoll Gan is also apparently such a point where locals could get easy access to alcohol. I suggest that we revise the regulations so that no hotel in an inhabited island (or with a causeway-connection to an inhabited island) should be allowed to sell alcohol. If such a regulation is implemented it would prevent the Hulhule Airport Hotel and the Ocean Reef Hotel in Gan from selling alcohol.

3. Similarly we should not allow any of the upcoming Airport Hotels (that are to be opened in regional airports) to sell alcohol.

Conference Tourism at Aarah or Gan, and Dhoonidhoo Island as a resort for locals 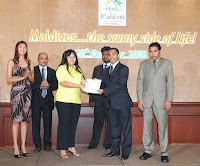 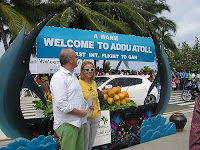 How about developing a resort close to Male that is completely custom designed to host conferences and accommodate delegates. This way we could promote Maldives as n affordable and ideal host of international conferences and business meetings.
The island of Aarah which was previously used as a Presidential retreat is an ideal island to develop in this was as a Conference Resort. Or we could develop part of Gan Island of Addu Atoll as a Conference Resort. Either way we could promote Maldives as a relatively affordable and attractive venue for hosting various conferences and business meetings of multi-national companies.
As we develop Aarah as a Conference Resort, we could also develop Dhoonidhoo Island as a resort for locals.
Posted by clubescape at 3:04 PM 10 comments:

A “China Town” and a “Little India” in the Maldives? 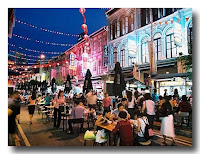 There is hardly any country in the world that doesn’t have a China Town. China Towns of Singapore and Malaysia are popular spots with Maldivian tourists but there are “China Towns” in countries such as the US and Canada too. I think we should build one too!

I know that usually such names and places evolve due to ethnic Chinese or ethnic Indians settling in those areas and bringing their cultures to those spots.
But that need not be the case all the time. We can designate a specific area as “China Town” and lease out land to build Chinese restaurants and street vendors who sell “cheap” Chinese products in stalls, shops that sell Chinese souvenirs, and have Chinese cultural shows and so on. We can do this in collaboration and with help from the Chinese government. I’m sure they will be perfectly willing to help financially too.

Similarly we can designate an area as the “Little India of Male” and lease out land to build Indian restaurants and street vendors who sell Indian spices and Indian “Halvahs” (sweets), etc.
The purpose of having places such as the “China Town” and “Little India” would be part of a larger programme or project to build places of interest for tourists.
Even Maldivians would be interested in visiting such places.
“Hey, why don’t we go to China Town tonight for dinner…”
Posted by clubescape at 5:55 PM 32 comments: 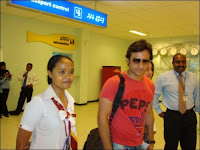 Island Holidays a Mumbai-based consolidator for Maldives now plans to tap the Bollywood segment by facilitating movie producers with shooting locations in the island nation and also arrange their travel plans (reports www.travelbizmonitor.com).

Elaborating on the plans for promoting Maldives through Bollywood, Aman Bhatia, Partner, Island Holidays said, “We recently facilitated the shooting of Kites, a movie by Rakesh Roshan in Maldives. We in talks with Maldives Tourism Promotion Board (MTPB) to promote movie shoots and advertisements at different locations in Maldives through Island Holidays and we are expecting it to materialise within a month or so.”

From the 1900 islands that form Maldives, there are certain islands where there is no habitation and are used for picnics by locals. Island Holidays will be promoting these islands and also the local villages for shooting, though to access these islands one needs government’s permission. To tap the Bollywood segment, the company will promote their offerings through their network of Bollywood producers. “Our offerings will also be promoted through actor Kumar Gaurav who is a part of the company,” stated Bhatia. It will also organise familiarisation trips for produces to get a feel of the destination.
Apart from promoting the destination through Bollywood, Island Holidays will also promote the honeymoon and leisure segment for Maldives along with other destinations like Sarawak in Malaysia, Turkey, Tanzania and Fiji.
Posted by clubescape at 3:03 PM 9 comments:

British head teachers are being encouraged to swap their high-pressured jobs for teaching posts in the palm-fringed atolls of Maldives (reports http://news.bbc.co.uk/)

Maldives' Minister for Education Dr Mustafa Lutfi told BBC that Maldives is seeking teachers familiar with the English curriculum in order to boost standards in schools on some of the country's 200 inhabited islands. Dr Lutfi says that while 12 to 15% of the government's budget is spent on education, an average of only one in three students obtains five O-levels at grade C and above.
"Currently our standard is poor compared to the money we spend on education," he told the BBC. "We want foreign professionals to come and help us turn our schools around."
The move is part of a wider strategy by the government, which came into power in November, to improve education, which also includes the privatisation of some schools.
"Previous education policies centralised schools and colleges in the capital, Male, where one third of the country's population live. We need to give the other two thirds similar access to high quality education," Dr Lutfi said.
British teachers with three years experience will be offered a monthly salary of 10,000 Rufiyaa (£523) and accommodation, and will teach in one of the country's 227 schools.
Posted by clubescape at 11:08 AM 9 comments:
Older Posts Home
Subscribe to: Posts (Atom) 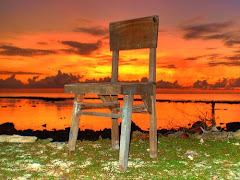